Ever wondered if other women go through pregnancies the same way you do? Now’s your chance to find out.

Our new series, Pregnancy Diaries, aims to share true pregnancy stories from real women. The best, the worst, hilarious and shocking moments from conception to birth.

In this diary entry, Bishop Baek describes her “miraculous life” after surviving a terrible car accident that left her with two brain hemorrhages, a broken bone, nerve damage in her right arm, severed tendons in her left wrist, and cuts and bruises all over her body. ”I am reliving my pregnancy.

Want to share your own pregnancy story?send by email mleach@nine.com.au

I didn’t get my period after the accident. I stopped eating. I could only have chicken cheese and avocado sandwiches for lunch and dinner. At the time, I was living in Victoria Rehab Center and I couldn’t stand the smell of the plastic food containers in my room, so they went too.

I noticed that my breasts had grown a little bit, but it hit my pituitary gland, which I was told was consistent with a head injury due to hormonal changes. I was in the bathroom for over a minute. When I came out to a concerned family member, I explained that I had been bleeding abnormally much the whole time, which I couldn’t explain. , I think I may have lost the baby.

I had several X-rays and scans after the accident, but months after being released from rehab, my husband and I had an instinct that I might be pregnant, even though we hadn’t been close since the accident. There was a time when I told you about my injury.

When asked if I was pregnant, for the first time I said yes and put on protective gear. I can’t explain it, but I just felt like I had to say yes, but I didn’t take any tests or anything.

A big tip and the reason I finally did a pregnancy test was that I was in the shower one day and looked down and saw a tiny little bump on my lower abdomen. I was thin at the time, weighing only 40 kilos, but that didn’t mean anything.

When I tested positive, I had mixed feelings. I was upset, angry, frustrated, overwhelmed, worried, worried. At that time, neither of my arms worked well and I was very scared. I was petrified after having an ultrasound and finding out I was about four months pregnant. I wasn’t sure if I could survive it or manage it physically.

Then the doctor told me I should stop getting pregnant. I was perplexed and scared. At least I knew I could get pregnant, and was told that I might get pregnant again in the future when my mind and body were basically in better shape. I suffered from depression and PTSD.

I was told that the baby’s facial structure could collapse and at best I would have a cleft lip, but I had to wait until I was 25 weeks. Inside, I was afraid that something bad would happen.

But I couldn’t abort a potentially healthy baby unless I knew the pregnancy was completely hopeless. We had a strong defensive mindset from the beginning, so we just couldn’t do it.

After the accident, I was on very strong medications that, among other problems, could cause malformations in the baby. stopped. It was tough, but I had to get off to a great start after what this baby had already been through.

Pregnancy was very difficult for my recovery, not only physically but also mentally. I was very hard on myself and worried about my baby all the time, so being pregnant probably increased my anxiety.

To deal with that, I met very regularly with a psychologist and a psychiatrist. I also went to rehab and did light exercises for my lower body. I had good days and bad days. Honestly, there were days when just taking care of this baby was keeping me going.

I told the staff about my fears and as soon as I woke up from the surgery they checked his heartbeat. !

When labor finally started, I didn’t wake him up because he had to work that day and didn’t want to disturb his sleep. I was able to spend my time safely while recording the time and watching movies with earphones.

I woke him up at 6am, told him I was in labor for 4 hours, and he left for work while I was at home getting ready. I went into labor very calmly and I am so excited to meet this baby. I wasn’t scared at all. I was very excited because I knew that I would meet my own miracle.

Giving birth was the best experience. At the hospital, I went through labor so calmly that her husband said I barely spoke. The only struggle I had was not being able to hold onto anything because of my injury. I eventually had to go back to bed because I couldn’t work any other way.

I remember all I wanted was to play the music on my iPod so I could listen to my playlist. I sang to my belly all through my pregnancy, but it was always the same song. You Mean Everything To Me It’s by Neil Sedaka so my husband got it for me. It got intense and my son came soon afterwards.

Things got a little worrying when the baby’s heart got weaker and had to be vacuumed out, but thankfully he was fine. I remember the moment You Mean Everything To Me By Neil Sedaka I started playing on my iPod and my eyes, heart and soul screamed. I think I stared at him for a long time.

Right now, I feel like the luckiest, most grateful human being on the planet. I have never been so grateful in my life. We are so lucky to have him and our story seems unrealistic – it is very overwhelming. , we share a very strong bond and it’s beautiful and intimate. I can’t believe it! ” 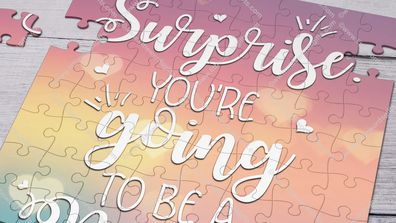